On arrival at İstanbul airport you will be greeted by one of our team and assisted in meeting your transfer driver for your transfer to your hotel. Check in to your hotel and enjoy the rest of the afternoon which is free for you to explore.

After breakfast at your hotel our tour guide will meet your and start your tour of İstanbul city highlights.

Here you will visit the ancient hippodrome, the beautiful Hagia Sophia, the Blue Mosque, Topkapi Palace and the Grand Bazaar .Your English speaking tour guide will accompany you during the tour and give detailed information about the sites in İstanbul.

Lunch : You will enjoy a great lunch and then continue your tour. After the tour, you will be transferred back to your hotel for your second night stay in İstanbul.
Overnight hotel in İstanbul

This morning you will be taken on a cruise on the famous Bosphorus strait - the body of water that separates the continents of Europe and Asia. On your cruise you will enjoy magnificent views, learn about the history of Istanbul as well as enjoy the beautiful natural setting of the Bosphorus. While the Bosphorus strait divides Europe & Asia geographically, it connects them culturally & historically. This cruise tour will be a highlight of your trip in İstanbul .

After the tour we will take you back to your hotel. You will then be picked up from your hotel with your luggage and transferred to the airport for your flight to Kayseri airport.

On arrival at Kayseri airport our driver will be waiting for you outside the terminal doors with your name on a sign and will transfer you to your hotel in Cappadocia.

Pick up from your hotel at approximately 9.30am for your Cappadocia Red Tour.

Our first stop of the day will be at the UNESCO World Heritage-listed Göreme Open Air Museum which was once a Byzantine monastic settlement comprised of more than 10 churches, rectories, accommodation and a theological school. You’ll be amazed at the tiny churches carved into the rocks and decorated with frescoes, many of which are in good condition.

Our second stop will be Paşabağ Valley, also called the Monks Valley, home to some of the best examples of mushroom-shaped fairy chimneys. This valley was previously home to a settlement of monks, and today you can climb up into one of the fairy chimneys and see part of their former quarters.

We then drive to Devrent Valley, also known as “Imagination Valley”, where some of the most surreal rock formations can be found, many of them shaped like animals. See if you can spot the camel, snake, seal and dolphin-shaped rocks.

We will have lunch at a local cave restaurant in the town of Avanos, which is famous for its pottery. After a tasty lunch of traditional Turkish cuisine, we will visit a local family-run pottery workshop for a kick-wheel pottery demonstration.

Our last stop will be Uçhisar Castle, the highest point of the Cappadocia. This is a great opportunity to get some great panorama shots of Cappadocia and the fairy chimneys. 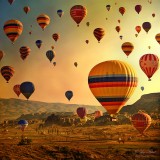 Pick up from your hotel after breakfast. Our first stop of the day will be Esentepe, a popular spot for enjoying a panoramic view of Göreme and its fairy chimneys and unique rock formations. We will then drive to Derinkuyu Underground City, one of the deepest of Cappadocia’s many underground cities, and built by early Christians fleeing from persecution. Including rooms such as stables, cellars, chapels and wineries, you’ll be impressed as you wander through this underground city. We then drive to Ihlara Valley where we will hike a section of the valley, checking out the tiny churches cut into the rocks, along the way. We will then have some chill time and lunch at Belisirma Village. We will also visit Selime Monastery, the biggest rock-cut cathedral in Cappadocia. Our last stop is at Pigeon Valley where you will have a great photo opportunity. After the tour ,we will transfer you to Kayseri airport for your flight to Istanbul.On arrival we will meet you and transfer you from Istanbul Airport to your hotel.

6. Day: Free Day in Istanbul & Flight back to home

Breakfast at the hotel. Check out by midday. You will be able to store your bags at the hotel until it is time to be picked up for your transfer to the airport for your onward journey.

We hope you have enjoyed your 6 Days Turkey tour package with us. We hope to welcome you on our another tour on your next trip to Turkey